Learning how to make magenta acrylic paint mixes is a handy trick to have up your sleeve, especially since it’s such a useful color.

Recently, I’ve started running low on my beloved Quinacridone Magenta and am dealing with supply issues so why not take this opportunity to do a bit of experimenting?

Playing with paint is one of my most favorite things to do and it’s super helpful at teaching you how to come up with custom colors.

Having your own “recipe book” filled with unique paint colors can potentially save you a pretty penny. Plus, it’s fun when someone asks “what color did you use for that” and you get total bragging rights to say “Oh, that’s a custom color I designed”.

So, let’s just dive right into the world of magenta and find out what freakiness with can come up with!

What Is Magenta Anyway?

Before we get to experiment, we’ve got to be able to distinguish what colors are put together to create magenta.

Magenta is described as a purplish red, a reddish purple, a pinkie purple, and a bunch of other wishy-washy terms.

What’s The Difference Between Magenta And Fuchsia?

Who would’ve thought there would be so much controversy over colors! But the question of whether Magenta and Fuchsia are the same hue is right up there with what came first, the chicken or the egg!

So, here’s the thing; tomato, tomahto, right? Let’s just leave it at that and move on to the good stuff.

Playing With Paint: How To Make Magenta

For the main experiment I wanted to see:

I also did a side experiment where I took the winning paint combo and played around with the ratios a bit to see how close I could get it to Quinacridone Magenta. Not only was I looking at the actual color but also transparency.

Lastly, I looked at paint colors that were recommended to lighten and darken magenta. These colors were mentioned numerous times around the web and I thought it would be interesting to put these claims to the test.

Remember, if you use different brands than the ones shown you may end up with different results. This is why switching directly from one brand to another can lead to disaster. Not all brands use the same pigment sourced from the same place so you may find that paint colors can vary.

Details Of The Main Experiment

In my quest to learn how to make magenta paint for myself, I decided to keep it real simple.

At the very top of the page I made color swatches of Quinacridone Magenta (Liquitex Basics) and Magenta Light (Arteza Premium) and then mixed both with some Titanium White.

Although my main goal was to find a match for Quinacridone I thought I’d also include Magenta Light just to see if I could find a close dupe for that as well.

You’ll see that each column is listed as a different red paint color. For the rows, I started with the base mixture of either red and purple or red and blue. In the next row I lightened each color with Titanium White and, lastly, I add Lemon Yellow to the previously lightened mixture.

This was done so that you could see the color a bit better and to also answer the question of “can you use yellow to lighten magenta?”

Each color mixture was created with the same ratios; 2 parts red to 1 part blue or purple.

I’ll get into the details of the side experiments a bit later.

How To Make Magenta: The Results

Again, all paint mixtures are 2:1. So, 2 parts red and 1 part Diox Purple or Ultramarine Blue.

What’s a part you ask? A part is any measurement. So, let’s say I use one squish of paint as a part. That would mean that I would use 2 squishes of red to 1 squish of purple or blue. It’s not an exact science but it’s good enough for the purposes of finding new paint colors.

Originally, I was just intending to stick with Diox Purple and Ultramarine Blue. However, a quick Google search of cool vs. warm blue paint colors convinced me to add a couple more colors.

I found some pretty serious discrepancies out there regarding undertones and how to tell if a blue is cool or warm.

This just proves how easy it is to become confused about the color wheel so if you’re looking for some guidance, check out my article that gives you the basics on color theory.

I’m so glad I decided to add Phthalo Blue and Cobalt Blue to the color roster. This led to some interesting discoveries that I think might be quite helpful to you.

Overall, we’ve learned a few things here; Phthalo blue is a warm blue because it leans toward green whereas Ultramarine Blue and Cobalt Blue are more cool because they lean toward purple.

Both your blue base color and your red need to have a cool undertone, so choose purplish blues and berry reds.

In addition, both the blue and the red you choose to use should be bright and vibrant. If either is too dark, you won’t be able to create magenta.

How To Darken And Lighten Magenta

We wouldn’t fully be learning how to make magenta paint without knowing how to darken and lighten it.

Note: Please forgive the blurriness in the photo. I’m a painter, but obviously, not a photographer, haha!

When it comes to lightening magenta, you can use Titanium White. This is the preferred option if you want to keep the vibrancy of the magenta.

When it comes to darkening magenta, obviously you can use a bit of black to gradually darken magenta. You will end up with a deep rich Bordeaux red.

Another option is to work with a cool green. Green is the complementary color to red, and since magenta is more red/pink than purple, green will turn it into a lovely shade of ….. wait for it ….. a shade that is suspiciously close to ….. Diox Purple! Maybe not the dupe we were looking for but, hey, any sub we can find is always welcome, am I right?

How To Make A Bright Magenta

In the blurry image above (sorry!), I took the winning combos, Rose Madder mixed with Ultramarine Blue and Rose Madder mixed with Cobalt Blue, from the main experiment and played around with them a bit more (what can I say, I love squishing paint!). The goal of this side quest was to create a color that was close to Quinacridone Magenta.

Quinacridone Magenta is a transparent color that is very cool and bright. It is straight up one of my faves and I use it in a lot of my own work.

What I learned is that you only need the smallest bit of blue added to Rose Madder to create a decent substitute for Quinacridone Magenta.

Additionally, Rose Madder is also a very transparent paint color and that plays in our favor when trying to dupe Quinacridone Magenta.

You also want to be stingy with the Titanium White when adding it to try to brighten the mixture. Too much white and you’ll lose the transparency so it’s smart to avoid it if possible.

So, what if you don’t have time to learn how to make magenta paint and you just want to know what other paint pigments would work as a sub?

Well, you have a couple of options, but you’ll still have to do a bit of mixing.

The two most popular recommendations to use as subs for Quinacridone Magenta are Quinacridone Violet, with a bit of red added, or Permanent Rose, with a bit of blue added. However, if you happen to have a tube of Arteza Premium Rose Madder, just play around with it. I find it’s a nice cool red that borders on pink which is a great starting point.

Quinacridone Magenta is such a beautiful color and one that is very useful. I actually didn’t realize just how often I use it until I started organizing my notes for this article. Let’s just say that there aren’t many paintings that I’ve done that don’t have magenta in them!

Some of the painting subjects I consistently use Quinacridone Magenta for are:

There’s more but these are the paintings where my go to is Quinacridone Magenta. It totally makes sense to learn how to make magenta paint when you use it as often as I do.

Magenta is quite a bold color so it can sometimes feel a bit overwhelming to figure out what other colors to use along with it.

Some popular color combinations that include magenta are:

If you need a visual, Color Palettes has a great selection of bright magenta color palettes with coordinating pictures.

Not only did we learn how to make magenta (or at least a close version), we talked about the best uses for the paint color, and which other hues look good with it. We’ve also found some more paint recipes to add to our paint mixing journals!

However, now that I know how to make magenta, I won’t have to freak out if I run out of the real thing. I can quickly make up my own and continue with my work in progress until I get the chance to purchase more.

If you found this article helpful, share it with your paint pals!

Interested In Learning How To Mix Other Paint Colors? 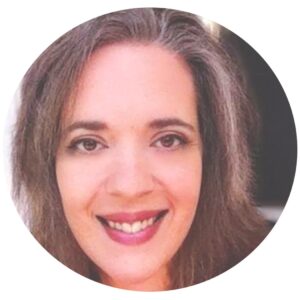 Pssssst! Being a beginner totally rocks! You have an incredible journey ahead of you, my friend. And, the best part? It never ends!

Painting makes me annoyingly giddy with delight and my goal is to help you to discover the artist you were always meant to be. Celebrate your own unique style while having a total blast!